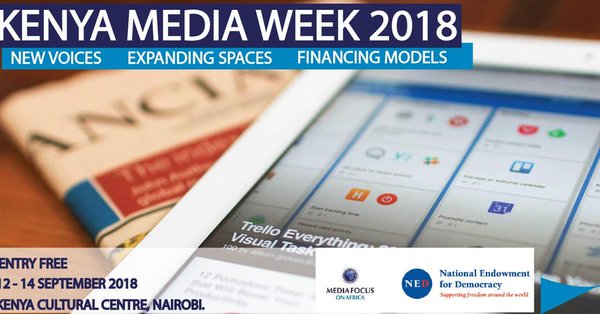 CONCLUSIONS OF THE KENYA MEDIA WEEK 2018

Television, Radio and newspaper media have been urged to stick to its ethics of verification, in depth analysis and fact checking in order to preserve the truth in journalism and countering fake news. Additionally, the media has been urged be creative in order to boost its survival by investing in research to fuel innovation. That was the conclusion at the Kenya Media Week held last week at the Kenya Cultural Centre, Nairobi.

During the event, there was also a call for journalists to exploit the opportunity presented by the current competition caused by friction between mainstream media and the robust growth of social media. An opportunity to work together across the media.

“We do more work when we (the media industry) collaborate as opposed to all of us trying to do our own thing. The current and new generation of journalists, have gained on the benefits of greater collaboration to make quality news content,” Dr.  Wambui Wamuyu, lecturer, Daystar University.

There were more calls for the mainstream media to ensure news reporting remains for the public good and accessible to all.

“Media is an important tool of democracy but they might not be aware of the power they possess in enlightening the people. Media needs to understand its role in promoting democracy,” Jessica Musila, Executive Director, Mzalendo.

The inaugural conference which brought together over 160 media experts; journalists, media researchers, journalism students and interested parties for three days of debate and discussions is expected to be an annual event to keep abreast and prompt innovation in the media sector.

“I have learnt so much about fake news especially the solution being simple, verification. Additionally, the government hasn’t given so much space to media. It doesn’t provide information and facts to the media, “ said Leyian Wallace Mootiun, KBC Radio journalist.

“Kenya Media Week is quite an initiative. The selection of topics attracted the participants. The kind of questions and structure of the conference is exactly what the media is currently facing and talking about. I have learnt so much from the participants and my fellow panelists,” said Anthony Makokha, Digital Media Editor, Nation Media group digital.

“I have been following the conversation online for the last two days before coming here today. It has been very intriguing. I hope we can continue the conversation and not let it end here, but use the ideas and solutions discussed can be really used to improve our sector. I strongly believe that this interaction between experienced journalists and new/upcoming journalists will shape the future of the media,” said Emmanuel Yegon, founder, Mobile Journalism Africa.

The organizers of Kenya Media Week, Media Focus on Africa in partnership with National Endowment for Democracy and experts in the media, have confidence in the value of bringing together media research and industry experts to move the media sector forward.

“We are going to do a publication of all the research papers presented and feedback received over these couple of days,” said Simon Gicia, Communications Officer, Media Focus on Kenya.