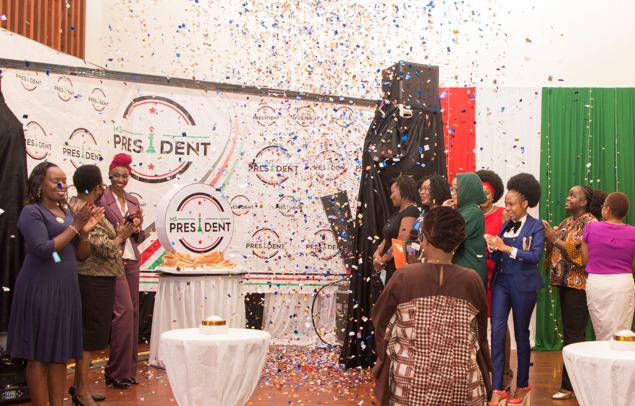 Media Focus on Africa has in a colourful event launched the second season of Ms. President Reality TV show, opening applications for all women who are community leaders across Kenya.

Ms President is an entertaining, educative, and thought-provoking Reality TV show that seeks to portray to a national audience the capacity and ability of women to lead effectively. The objective of Ms. President is to change Kenyans’ perception and attitude towards leadership by women in communities and in the country.

Speaking at the event, the chief guest Hon. Racheal Shebesh, Chief Administrative Secretary, Ministry of Public Service & Gender said that having training is a gateway to a great opportunity. She called on political parties to support women and give them opportunities and platforms that are meant to push them to great leadership roles.

‘I was once one of the chosen few to be sponsored to attend a political training for young leaders. It propelled me to who I am today.’ She said.

Ms President 2 will introduce to the national audience another group of women of different backgrounds, who are intelligent, articulate, and ‘presidential’, with an eye on the 2027 general election and for appointment to senior public service positions.

Among the invited guests were Season 1 contestants who are already great change-makers in our society. One notable example is that of Hon. Nadia Abdalla, who through Ms President show was appointed Chief Administrative Secretary in the ministry of ICT and Youth by Kenya’s President Uhuru Kenyatta.

Speaking at the launch, Acting High Commissioner for Canada, David Da Silva called on aspiring women leaders to have courage and step out.

‘’To all aspiring female leaders, I urge you to put yourselves out there. It is not easy given the challenges you will face along your journey but it is worth it.’’ He said.

H.E Henriette Geiger, the European Head of Delegation to Kenya joined the meeting virtually. She thanked all the supporters of Ms President and stressed the need to push for women’s representation in various leadership roles.

Echoing Her Excellency’s remarks, Rukaya Mohammed, UN Women Country Director said that women were underrepresented in the political landscape and that there was a need to continue pushing for the implementation of the two thirds gender rule.

Politics in Kenya is characterized by low representation of women in decision-making despite women constituting 50.5% of the Kenyan population.

Women’s political representation is still below the constitutional threshold of 33% and further below the UN Sustainable Development Goal (SDG) target of 50%.

Do you believe you have what it takes to be the next Ms President? Who are we looking for?

Are you a Kenyan woman? Aged between 20-60 years & living in Kenya? With a diploma

or higher qualifications? An excellent communicator? Agile & creative? Are you a leader

Do you believe in women leadership?

If you you have all these qualities, please click on the link below to download the application form. Here you will also find details on how to submit the form once you have filled it.